It’s hard for me to think of a better review in the last decade too! I was absolutely thrilled to see this review of A Messy Affair in the Morning Star this week.

‘A Messy Affair is the third in the warm-hearted but sharp-tongued series about a Hungarian migrant working as a house cleaner in London’s Islington. Yet again, she becomes entangled in murder when her wild young cousin’s boyfriend is found dead in a hotel room.He was the star of a reality TV show and, as Lena discovers, there is no world less real than that of reality TV. The key to the mystery will lie in sorting out which parts of the dead man’s life were scripted and which spontaneous. It’s hard to think of a better amateur sleuth series in the last decade.’ 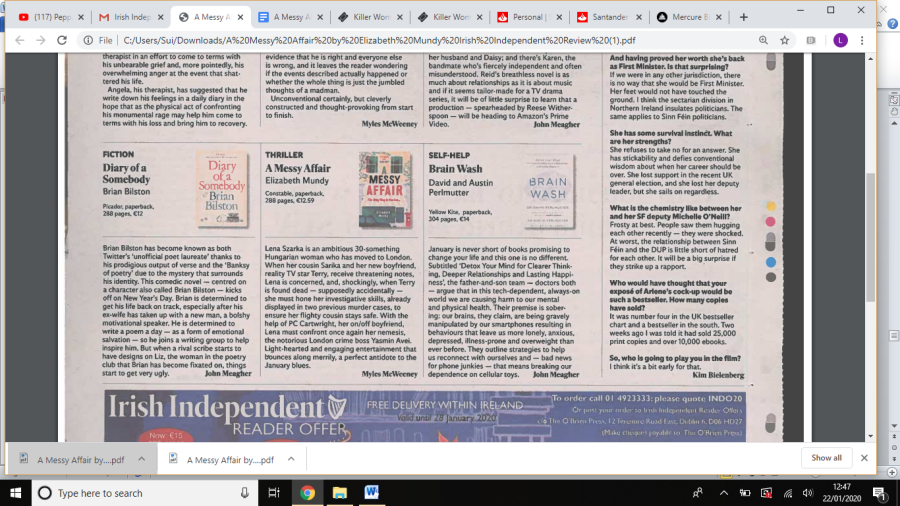 If, like me, you’re looking for an antidote to the January blues, the Irish Independent writes that you could discover it in the pages of A MESSY AFFAIR.

‘Light-hearted and engaging entertainment that bounces along merrily, a perfect antidote to the January blues.’

I’d be rather pleased if someone described me like this, so I was delighted with this review of A CLEAN CANVAS from Mat Coward at the Morning Star!

He goes on to say that the Lena Szarka mysteries ‘looks set to become a highly popular series.’

Elizabeth Mundy’s A CLEAN CANVAS is the second outing for Lena, a Hungarian cleaner living in North London.

This time she’s forced to investigate the theft of a painting from the Islington gallery she’s working at, when her unreliable cousin vanishes immediately after the robbery.

The only way to prove her innocence is to find the real culprit among the inhabitants of the weird world of art collectors, using the detective skills she’s learned from her domestic work.

Witty and warm but with an unsentimental core of steel in its chronicling of London’s guest workers, this looks set to become a highly popular series. 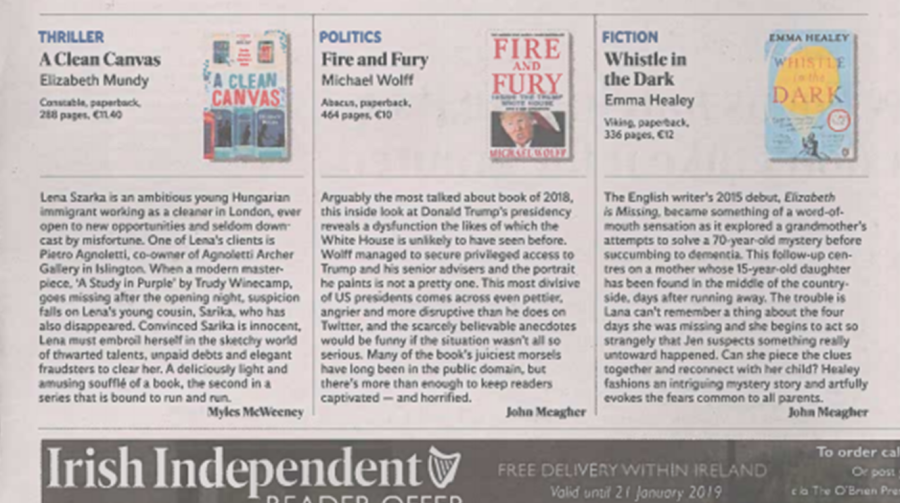 The Irish Independent is fast becoming my favourite newspaper! This weekend they ran a lovely review of A CLEAN CANVAS in their Book Brief section.  Myles McWeeney described it as ‘a deliciously light and amusing souffle of a book, the second in a series that is bound to run and run’.

And in case you missed it, last weekend they compared Lena to Agatha Raisin and described her as ‘formidable and funny’.

Clearly the Irish have excellent taste in books!

‘Lena Szarka is an ambitious young Hungarian immigrant working as a cleaner in London, ever open to new opportunities and seldom downcast by misfortune. One of Lena’s clients is Pietro Agnoletti, co-owner of the Agnoletti Archer Gallery in Islington. When a modern masterpiece, ‘A Study in Purple’ by Trudy Weincamp, goes missing after the opening night, suspicion falls on Lena’s young cousin Sarika, who has also disappeared. Convinced Sarika is innocent, Lena must embroil herself in the sketchy world of thwarted talents, unpaid debts and elegant fraudsters to clear her. A deliciously light and amusing souffle of a book, the second in a series that is bound to run and run.’

There was a lovely piece in the Sunday Independent in Ireland by Anne Marie Scanlon about cozy crime last weekend, describing it as the perfect way to ‘banish the bleaks’ of the cold winter months.

A CLEAN CANVAS is described as ‘the second of a, hopefully long, series featuring Lena Szarka, a Hungarian cleaner and amateur detective by Elizabeth Mundy.’ Scanlon compares Lena Szarka to Agatha Raisin: both are ‘formidable and funny women who like men’.

Get your own dose of warming cozy crime here, or if you’re still to be convinced you can read the full article here. 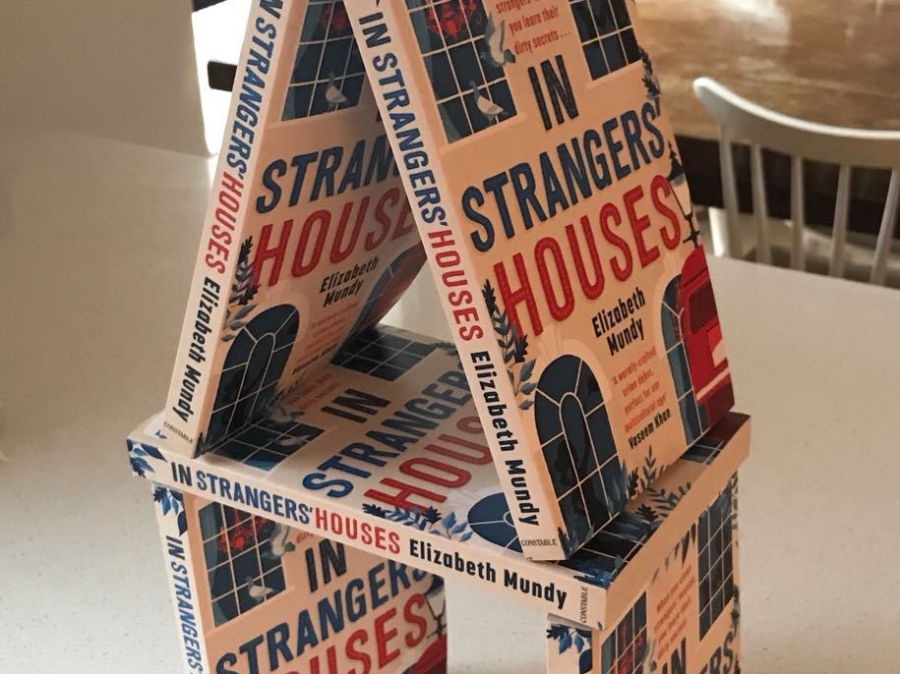 There’s a very insightful review from Larissa Kyzer on Reviewing the Evidence. She describes IN STRANGERS’ HOUSES as “the perfect of-our-moment set-up that would be compelling even if it weren’t for the crime plot”.

“As a rule, the fundamental premise for most mystery series featuring an amateur detective is a shaky one. After all, elderly spinsters, small town librarians, and mystery authors don’t generally live the kind of lives that lead them to get mixed up with one violent crime, let alone many. This, then, is one of the fundamental delights of Elizabeth Mundy’s debut IN STRANGERS’ HOUSES: her protagonist—the plucky and ambitious Lena Szarka—literally goes through other people’s dirty laundry for a living.

Lena is a Hungarian cleaner in London, living a version of that all-too-common and none-too-glamorous immigrant experience. Namely, she works exhausting hours at an unskilled, low-paying job while living with multiple roommates and dreaming of the day that she’ll finally get a foothold in her adopted home. Add to that the fact that she’s an Eastern European in post-Brexit London, forced weather all manner of oblique microagressions and blatant discriminations (“You’re Romanian, too, aren’t you? You come here to beg”), and you have the perfect of-our-moment set-up that would be compelling even if it weren’t for the crime plot.” Read more

I’m so pleased with this lovely review from Mat Coward of the Morning Star. He tells us that ‘this debut novel begins a series featuring an appealing, and more believable than usual, amateur sleuth.’

When I wrote IN STRANGERS’ HOUSES it was important to me that I showed a different, more positive side to immigration, and I’m delighted that the socialist paper the Morning Star has chosen to review my book.

Let’s hope he’s right when he says that ‘it’s a long time before Mundy runs out of plots’!

‘LENA and Timea have know each other since they were children in a small village in Hungary.

In IN STRANGERS’ HOUSES by Elizabeth Mundy, a desire to see more of the world has brought them to Islington where they work as cleaners in private homes.

When Timea vanishes, Lena is convinced that one of her client has silenced her after she uncovered one too many secrets with her duster. The police don’t agree, so it’s up to Lena to find her friend

This debut novel begins a series featuring an appealing, and more believable than usual, amateur sleuth. The daily help set-up, along with the guest worker subculture, should mean it’s a long time before Mundy runs out of plots.’

This review on www.lizlovesbooks.com might be the best one yet!

Barnsley describes IN STRANGERS’ HOUSES  as ‘a wonderfully quirky, gorgeous crime drama with a main protagonist you can really get behind, some cracking dialogue, an intricately fascinating plot and really, despite the dark nature of some of the crime elements, a whole lot of fun.’

She goes on to say that ‘IN STRANGERS’ HOUSES has a beautifully immersive mystery element, a hugely refreshing change from your standard detective/Private Investigator/Lawyer route – Lena is like the Poirot of cleaners.’

You can’t ask for a better comparison than that!

IN STRANGERS’ HOUSES had a lovely 4.5 star review from Natasha Harding in The Sun today. I’m absolutely delighted with her judgement: ‘Beautiful writing, a fine debut.’

‘LENA SZARKA, a Hungarian cleaner working in London, takes huge pride in her job – even though the people she works for rarely notice her existence.

When her friend Timea disappears, she suspects one of her clients. The police don’t share her suspicions so Lena beings her own investigation.